The inauguration of Donald J. Trump as the nation’s 45th president will shine a spotlight on the small village of Kallstadt, located in Rhineland-Palatinate, Germany, as it was from there that the president’s ancestor, Friedrich Trump, emigrated in 1885.

Trump is a German surname derived from the word for “drum.” The name is on record in Kallstadt from the 17 th century, and has been spelled many different ways including Drumpf, Drumb, Tromb, Trum, Dromb and Trump.

Friedrich Trump emigrated in 1885 at the age of 16, became a citizen in 1892, and during the Alaska Gold Rush amassed a modest fortune by opening restaurants and hotels for gold seekers on their way to the region. 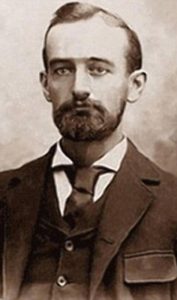 Friedrich or Frederick Trump died in 1918, survived by his two children, Elizabeth and Frederick Christ, the president’s father. The president served as Grand Marshal of the Steuben Day Parade some 20 years ago.

Trump is the fourth American president of German descent: Dwight D.Eisenhower, whose ancestors were named Eisenhauer; Herbert Hoover, originally Huber, and Richard Nixon, whose maternal line originated in what is now Germany.